Atlantic Markets - Faatman or Faang Atlantic Capital Markets Spotlight
;
CFDs are complex instruments and come with a high risk of losing money rapidly due to leverage. 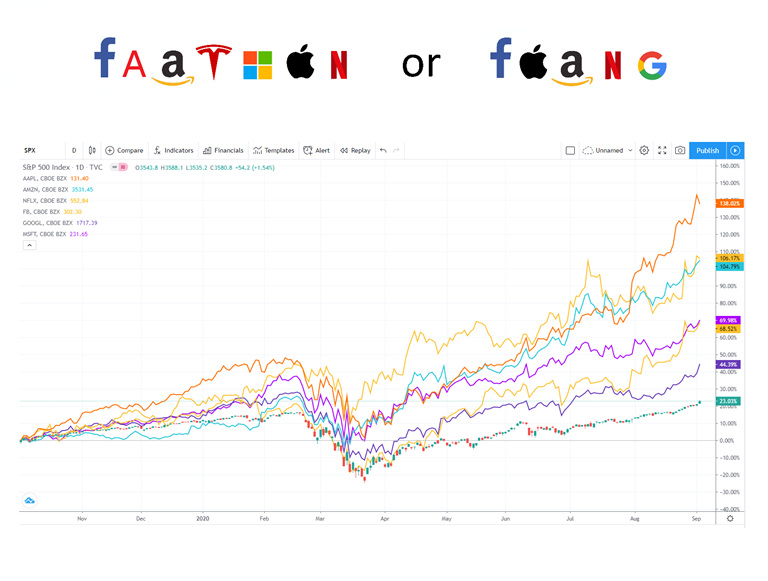 Mover over FAANG, roll on FAATMAN

All investors are fully aware of the market dominance of the FAANG stocks:

What has become increasingly clear in the recent months is the power of FAATMAN stocks:

The FAANG group has become so well known that a number of firms have created their own FAANG indexes so that clients can gain exposure to these stocks in one instrument. It will not be long before the same occurs to the larger and even more dominant FAATMAN index.

The Internet mania seen in the stock markets in 1999 was based on the promise of this future. That there would be a world where a few digital giants would become global powerhouses. Most of the companies around in 1999 that were promising this future have long gone by the wayside, but the FAATMAN stocks are the ones that have realised this dream. Even Tesla, a manufacturing company, is trading heavily on the promise of AI and autonomous driving and is far from a traditional automaker.

Back in 1999 it would have been hard to imagine global brands like Exxon Mobil being relegated out of the Dow Jones Industrial Average, and replaced by the likes of Salesforce.com an online Customer Relationship Management service company, but of course that is precisely what recently occurred.

In 1958, corporations listed in the S&P 500 had an average stay of 61 years within the index. By 1980 this had dropped to some 25 years. Then by 2011, the average stay had fallen again to just 18 years. At the present rate of turnover as much as three-quarters of the constituents within the S&P 500 will be replaced by 2030. The expectation is high that this will not occur for the FAATMAN stocks. Leading to a very clear index within an index.

This super index will survive while the rest of the S&P 500 goes through ever increasing amounts of churn, it is the ultimate survival of the fittest test. This “Digital versus Analogue” out performance looks set to remain in place for large swathes of the global market for the years ahead.

Tesla is set to join the S&P 500 soon. The inclusion of Tesla would give the FAATMAN index a weighing of around 23% in the S&P 500. Giving these 7 stocks a near one quarter stake in the whole US blue chip index. The graph on the cover page does not even include Tesla’s share price, as the performance has been so stellar it makes even the strength of the other FAATMAN stocks look weak.

The centre of gravity of the FAATMAN is so powerful it looks set to continue to eat in funds from the wider market. The Western markets have seen an explosion in the digital marketplace over the past 10 years, this is yet to occur fully in all markets globally.

As a result, the extra-ordinary growth of the FAATMAN we have seen is far from over for the long term. Only Facebook could be seen to be getting close to saturation, but as Apple and Google continue to convert more and more of the global marketplace to mobile, even Facebook has plenty of room for further global growth.

Due to the truly historic dominance of FAATMAN calls are growing for them to be more closely regulated, or even broken up. This trend is set to accelerate as they continue to gain more market share. Many economists and politicians are vocal on the growth in the wealth gap. This super-index is supercharging this wealth divide. As these big 7 continue to leverage their market dominance and power onward and away from their competitors.

Facebook is increasingly under regulatory pressure. So far social media has been able to side-step the more traditional publishing rules. Moves in Australia are starting to threaten this immunity however, with Facebook even suggesting in response it may have to pull out of Australia. If this move from Australia was to gain political momentum globally, such as any “tax the rich” populist vote agenda, the business model of Facebook could evaporate quite quickly.

Amazon is facing calls to be broken up due to its dominance and the way that it is decimating the main streets and high streets across the globe. It is not impossible to imagine a scenario in the future where competition authorities will demand Amazon to be split into Amazon US, Amazon UK, Amazon Europe etc and that each would need to demonstrate its ability to compete effectively with the other, and potentially even be forced to open up its logistics chain to competitors the way that monopolistic broadband providers have been ordered to open up their networks in some countries.

Tesla is a market leader in car battery technology, today. But if a better technology was developed by a rival in the future, the competitive advantage that Tesla has built up would be eroded very quickly, or as with the Amazon example it is not impossible to image a state like California mandating that Tesla battery technology has to be opened up to rival manufacturers in order to speed up the up-take of electric vehicles due to global warming.

Due to the powerful long-term growth story for FAATMAN and due to the Fed unabashedly pumping liquidity into the system, funds have been seen pouring into this super index. As a result, by any traditional measures the index is extremely overbought. Leading some to compare the current situation to the internet mania seen in 1999. While there is certainly plenty of froth in the market at these extreme levels, it is clear this is very different from 1999 as in this case this super-index is actually creating the future that we dreamed of back in 1999. In 1999 they were instead just selling the dream.

Within a few years the genuine expectation is that we will have driverless cars, space tourism, virtually limitless face time calls from anywhere, global broadband coverage allowing ever increased connection to the internet, with jobs, entertainment, shopping and services available 24/7 wherever you are in the world.

The only real long-term concern for the FAATMAN is geo-political. Left to its own devices in a free market economy the momentum behind these giants is too strong to stop over the long term. It is very clear then, that all investors should have exposure to a wide selection of the FAATMAN in their long-term portfolios.

Are you fully invested?

Are you going into the future with these companies?

Do you love the idea of investing in FAATMAN but have concerns about wider market losses in the months ahead? If so, here at Atlantic Capital Markets we believe we have a solution for you.

For those fortunate enough to be able to invest with CFDs we can solve your problem by building a market neutral portfolio. Which would have long exposure to FAATMAN but also have equal and opposite short exposures. These short positions can either be to the wider market, or to more direct analogue alternatives.

So, get in touch if you want to have your FAATMAN cake and eat it.

We are a multi-asset broker, offering clients the ability to buy the shares either in a traditional fashion with standard shares or taking advantage of leverage and purchase via a CFD.