US Election Outcome and what Stock to buy
;
CFDs are complex instruments and come with a high risk of losing money rapidly due to leverage.

Stocks to have in your portfolio

The US media coverage has shifted a little in the past few days as it finally starts to realise that they do not call the US election, they never have. What occurs is the US media calls the result as they see it. Traditionally the loser in the election, seeing the same information, then concedes. The concession means that the official process that actually ratifies the result gets relegated to a largely ceremonial affair and gives the illusion that it is called by the media.

There is a reason the Election occurs in November and inauguration does not take place until January, there are a lot of steps to take place, and each step has built in redundancies in case of legal disputes and or special situations that require more time.

So, with President Trump not conceding, as expected, and throwing lawsuits at every step, the traditionally straight-forward process will become more drawn out, public, and complicated than normal.

Going into the election President Trump clearly had a plan in case Pennsylvania was lost to the Democrats. Within the US constitution it is theoretically possible to remain President despite losing the Electoral College, an outlier obviously but technically not impossible. Trump had hoped that if he lost this key state by a few hundred votes he would be able to create so much confusion and distrust that he might actually be able to cling on to power through legal moves, despite losing. This would always have been a long shot, but it is now a virtual impossibility.

In 2000 Al Gore lost the whole US election by 537 votes, when he lost Florida by that amount. Currently President Trump is losing in Georgia, Arizona and Pennsylvania by significantly more than that 537 votes. So, re-counts are simply delaying the inevitable and the legal avenues seem especially remote. So, the only question left is when will reality hit home for Trump and when will he concede, because of his character not for a while yet.

Fortunately, all this psychodrama was so predictable that the markets continue to look through the noise and remain more preoccupied with Covid. Remember Covid? Western Democracies have seen a serious spike in infections in recent weeks, but markets have been buoyed as this has not been matched with a comparable uptick in deaths. The major debate for the markets in the weeks ahead is not the US election, it is, will the Covid death rate spike, or not. News of a 90% effective Covid vaccine moved the markets sharply higher today only signals again how this is where the major focus lies, not on the election anymore.

The only election related issue left is not with the Presidency but the Senate, there remains a chance that the Democrats could secure two seats in Georgia in the runoff elections on January 5th, this is unlikely, but it is not impossible, and it would take them to the 50 seats they need. This would create market nervousness as this would allow President Biden to pursue more aggressive policies. So, Georgia will be the epicentre of US politics for the next few weeks. But as for the Presidency that is a done deal now and the market is looking right through the Trump noise.

The stocks seen gaining in the months ahead can be broadly split into two groups, those that were performing well into the election, and those that may see gains from the new administration.

Amazon is clearly the 900-pound gorilla in the online retail space, it has built up serious barriers to entry, not through anti-competitive pricing, quite the opposite. By making pricing so attractive it simply decimates the traditional bricks and mortar rivals. Here in the UK for example, you can drive your car to a superstore or town centre (Covid allowing) spend money on petrol, in many town centres pay for parking, to arrive at the shop which more often than not does not even have what you want, wasting an hour or two of your time. Or within a quick search online, you spend no money on search/travel costs, have near infinite variety and the product is delivered to your door, often within 24 hours, and often for less cost than it would have cost you to travel and buy it yourself. There is simply no competing with this. The UK High Street will continue to disappear in the years ahead.  There are some other players in this sector, but if you want exposure to online retail in your portfolio Amazon is the clear choice. 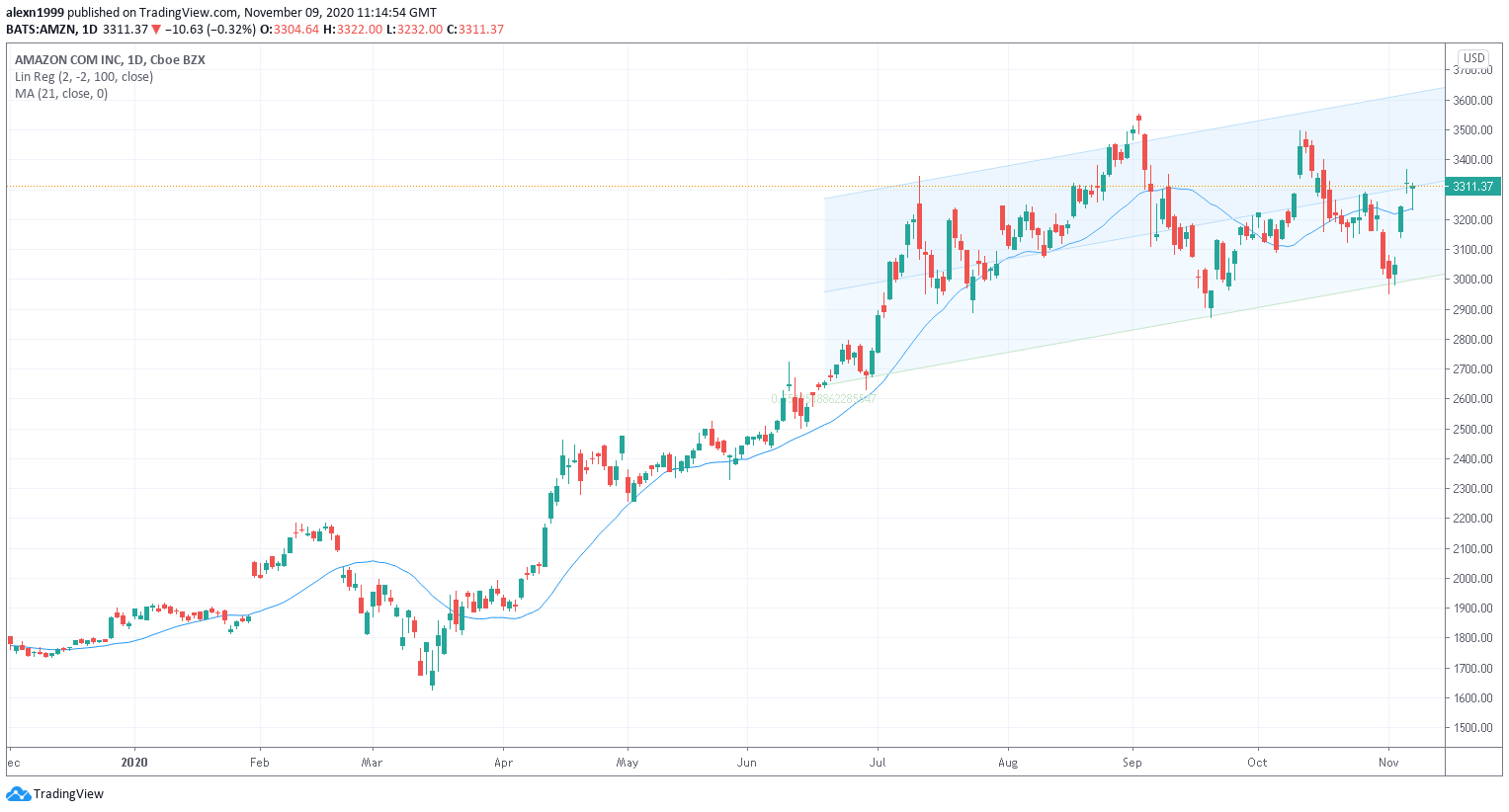 Amazon is destroying the traditional high street retail model, and Netflix is destroying the terrestrial broadcast TV model. Consumers do not want to wait week after week for their programmes, nor be bombarded with annoying adverts when watching them. The market has spoken and clearly many millions around the world are happy to pay a monthly subscription, to lose all the ads, and be able to watch what they want, when they want it.

The barriers of entry in this marketplace is content. Netflix moved heavily into creating its own content in the past few years and is well ahead of the game and has an astonishing library of its own. In fact, the list of the Top 10 most watched shows this year, all of them are Netflix shows, apart from one, The Boys, created and distributed on Amazon Prime, another reason to have Amazon in your portfolio, see above. 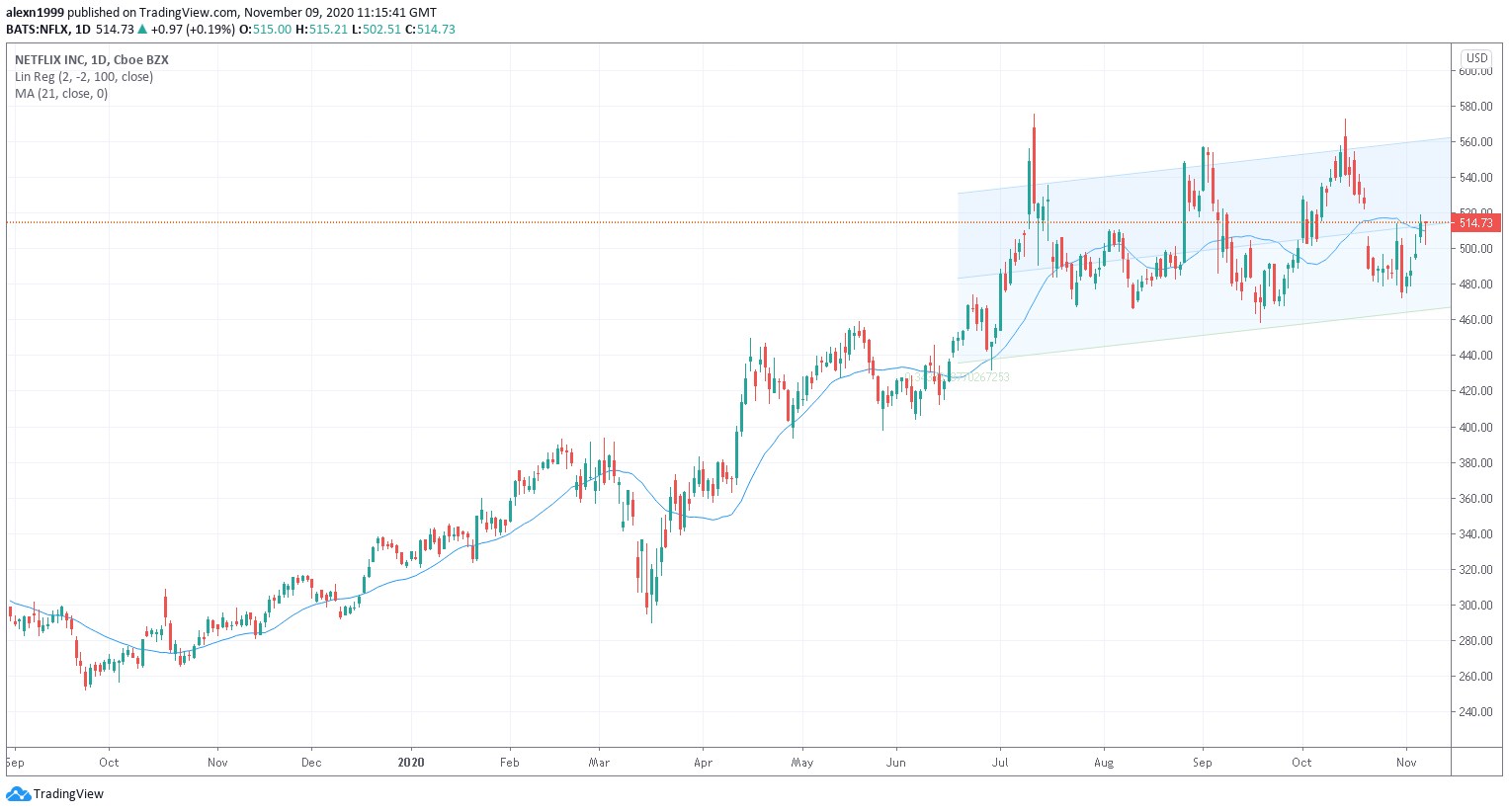 As little as 12 months ago the idea that doctors’ appointments could be undertaken remotely would have been rejected by many consumers and also by most in the industry. Well the past few months have shown that to be nonsense. It is of course extremely efficient to do the vast majority of initial doctor appointments online, or over the phone, to act as a filter to who actually needs to be seen in person, it just took Covid for this to be recognised. This is how the NHS has operated effectively for the past 6 months, and could well be long term, and could be extended to cover more treatments, not just as an initial filter, nor just as a Covid stop-gap measure.

Teladoc is a US based firm that specialises in the creation and servicing of these online medical consultations. Its market cap is already $17bn and is fairly well established in the US, but as online medicine rolls out globally in the coming months the market leader in this space looks set for further gains ahead. Making Teladoc one to watch for those wanting exposure in this sector. 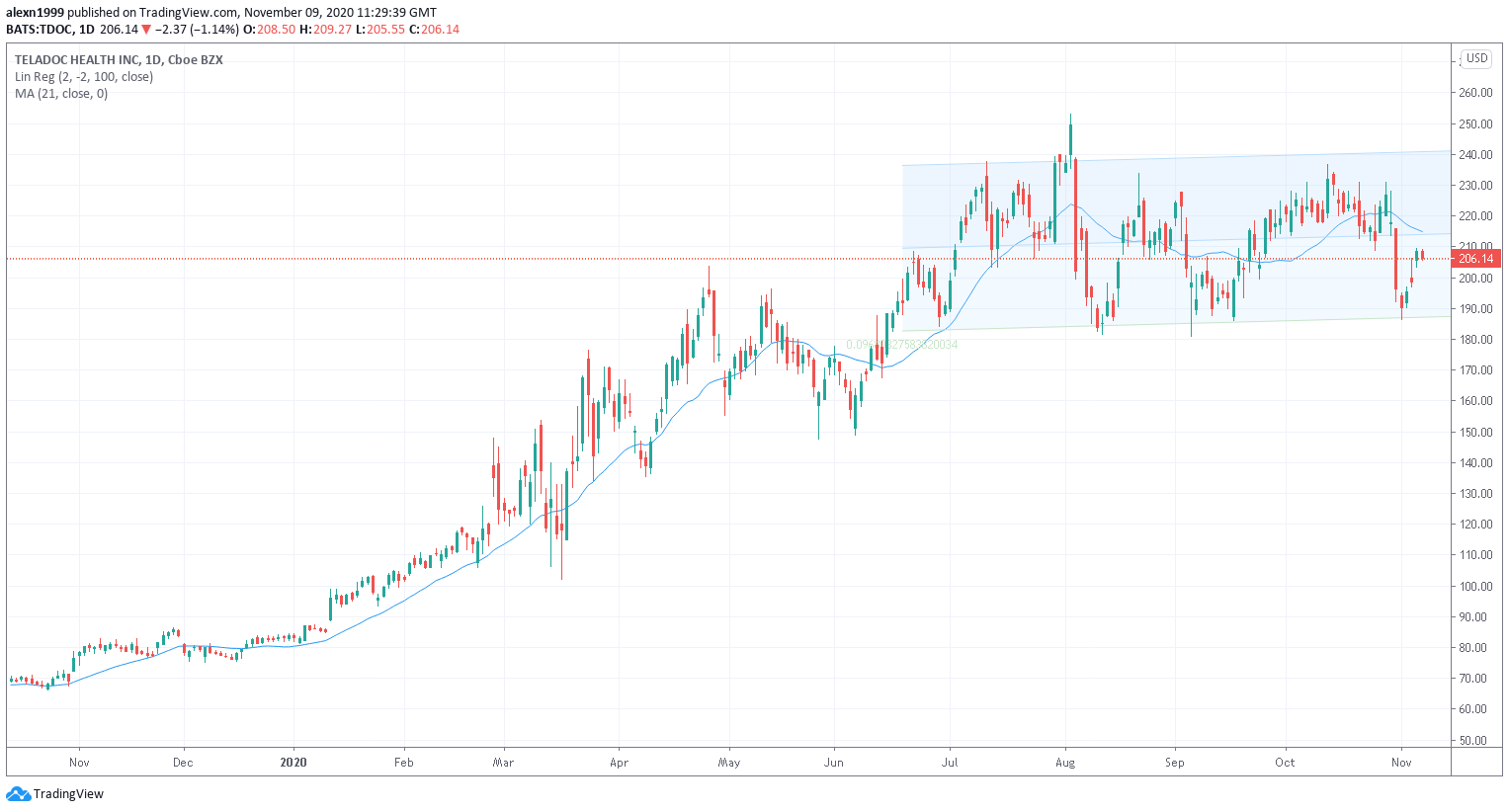 Slack is an online service that allows companies to create channels and workflows remotely. Which can be integrated with many other tools, such as Zoom and/or VOIP and allows normal business practices to be operated remotely, at least as efficiently as in the office, and in many cases more so. The market cap is already $15bn. But as more and more office managers start to understand the benefits of this new remote business model, the global take up of Slack is set to soar further.

Why have the costs of an expensive prime location office, when you can have a cheap and simple office hub, with the key workers needing to be paid less as they no long need to commute into work anymore, nor be paid more to cover the expensive mortgages they need to be close to the expensive offices? This 20th century thinking will slowly go the way of the Dodo’s in the 21st century. Slack is one of a number in this space that should be part of your 21st century focused portfolio.

Without looking at the graph below you may have imagined that Caterpillar, the US based Construction, Farm and Machinery manufacturer might have suffered badly over the past 12 months, due to Covid and the general market turbulence. The graph however shows how the US giant, with a market cap of some $87bn, has been able to power through the economic issues and post solid gains and moving within a whisker of posting new all-time highs. President Biden will struggle to push through any particularly left leaning infrastructure projects, such as his Green New Deal, but the Republicans are likely to be comfortable working on a bi-partisan basis to support industry in general, and this is likely to benefit Caterpillar. For those looking for a play on Stimulus spending, Caterpillar will be one to watch. 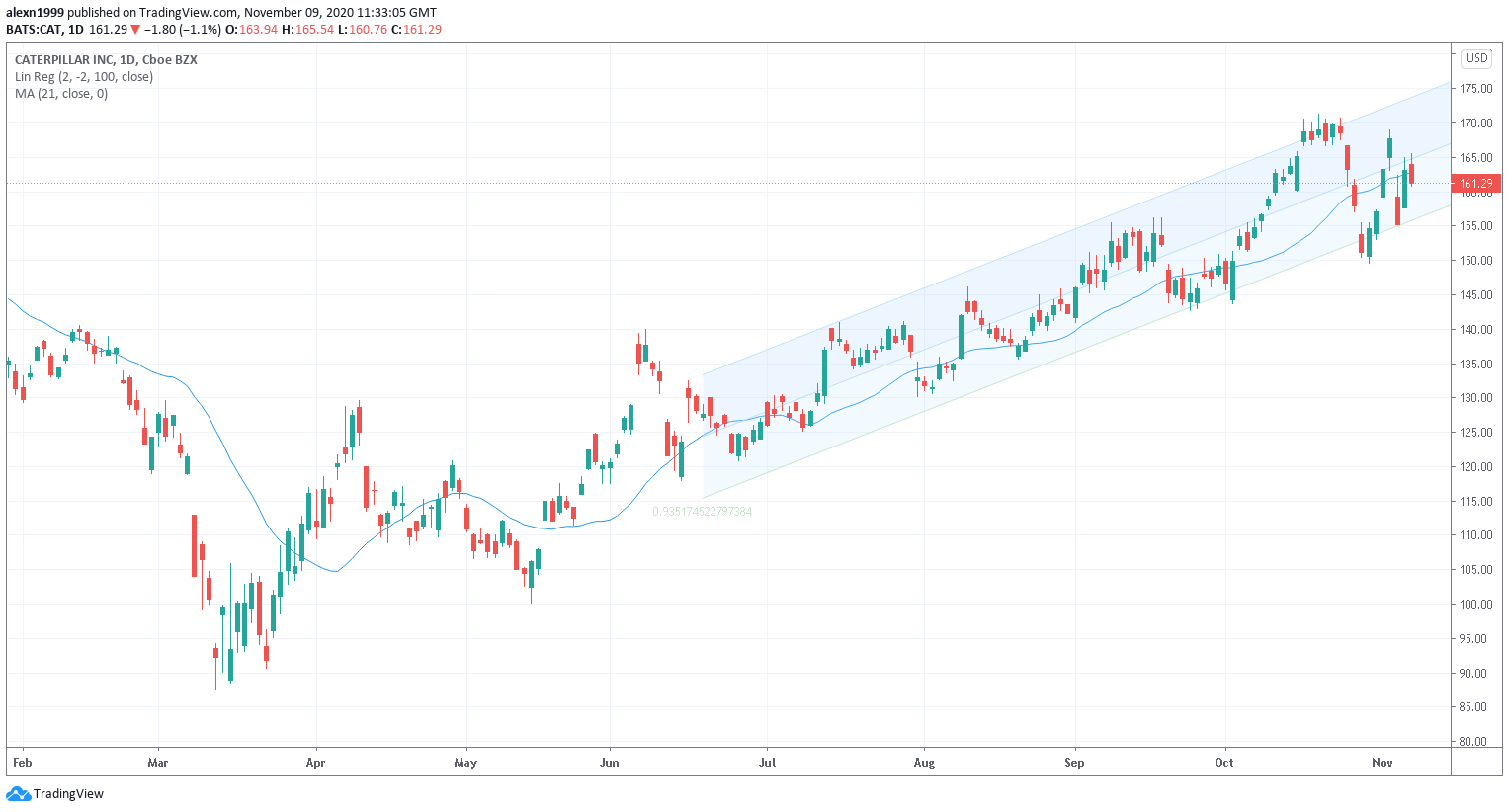 We are an independent UK based and regulated Multi-Asset broker. Offering our clients, the ability to trade using a range of products such as shares, CFD’s and options. Our range of services vary from a full advisory service for those that want an advisor by their side to the self-trade alert based account for those that want signals but be left to it.

We have provided this information for your general guidance only and it should not be considered as investment advice. Atlantic Capital Markets will not be liable for any loss or damage caused by a reader's reliance on information provided by us. We make no claims or representations as to the accuracy or completeness of any material contained in our guides.

Atlantic Capital Markets is Authorised and Regulated by the Financial Conduct Authority (No 764562).